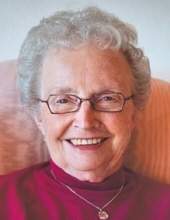 Ann and George moved to Cheshire in 1958 with their three children. Ann lived in Cheshire for 34 years and after George’s death in 1979, relocated to Topeka, Kansas to enjoy her grandchildren. In 1991, she moved to Green Mountain Falls, Colorado on the invitation of her son and his wife. Finally Ann returned to Cheshire as a resident of Elim Park in 2010. Ann was Secretary to the Headmaster of Cheshire Academy for 19 years. She was passionate about her work and much loved by faculty, staff, and students. Ann had a beautiful singing voice and was active in church choirs through the years including at St. Thomas Becket Church in Cheshire. A high point of Ann’s life was being selected as a member of the New Haven Chorale, where she sang with the New Haven Symphony and had the opportunity to sing under the direction of Robert Shaw in New York City. She was also an avid gardener and accomplished at jewelry making, beading and needlework.

Ann is the beloved mother of Stephen Buettner and his wife, Diana of Burnsville, NC; Susan Allen and her husband, Jon of Houston, TX; and Diane Buettner of Cheshire. Ann is also survived by her loving grandchildren, Clifford Allen and his wife, Claire of Brooklyn, NY and Yvonne Allen of Houston, TX; her sisters, Carmel Martin of ME and Shirley Hanley of IA; and her brother, Jerry Lickteig of IL.
She was predeceased by her siblings, Urban Lickteig, Dennis Lickteig, Edna Waldschmidt, Donovan Lickteig and Jack Lickteig.

Ann’s funeral services were held privately at the family plot in Cheshire Hillside Cemetery. The Alderson-Ford Funeral Home of Cheshire was entrusted with her arrangements. At the request of her family, memorial contributions may be made to the Nature Conservancy at www.nature.org or DoctorsWithoutBorders.org
To leave online condolences for her family, please visit www.fordfh.com
To order memorial trees or send flowers to the family in memory of Ann M. Buettner, please visit our flower store.