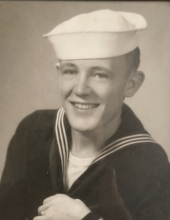 NAUGATUCK- Allan W. Johnson, 86, passed away, Wednesday, February 05, 2020 at Beacon Brook Health Center in Naugatuck. He was the widower of the late Antoinette (Salerno) Johnson whom he was married to for 54 years.

Allan was a veteran proudly serving in the United States Navy where he was a member of the (UDT) Underwater Demolition Team, from 1951 to 1955 during the Korean War. He was an E1 Electrician for Johnson Electric prior to his retirement, and a longtime member of Grace Lutheran Church.

Arrangements- Funeral services will be held at The Alderson-Ford Funeral Home of Naugatuck, 201 Meadow St, 06770 on Sunday, Feb. 9, 2020 at 4 p.m. Friends may call at the funeral home on Sunday from 2 p.m. until the time of the service. Members of the Naugatuck Veteran’s Council will meet at the funeral home on Sunday at 3:30 p.m. Burial will be in the spring in Grove Cemetery, Naugatuck, with full military honors. Memorial contributions may be made to the Wounded Warrior Project 1 South Nevada Avenue, Suite 205 Colorado Springs, Colorado 80903, the Shrines Hospital for Children, 516 Carew St. Springfield, Mass.01104-2396 or the Naugatuck Veteran’s Council, P.O. Box 226, Naugatuck, 06770-0226.
To order memorial trees or send flowers to the family in memory of Allan W. Johnson, please visit our flower store.