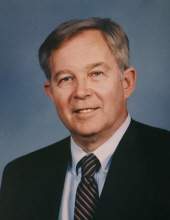 Algert R. Sanders, 83, of Cheshire, CT, passed away peacefully at his home on February 6, 2021 of end-stage heart disease. Al was born February 15, 1937 in Libau, Latvia, the son of Gedimin Sanders and Elizabeth Chabaud Sanders. In 1940, after Russian forces began invading Latvia, Al’s mother escaped with her three children, taking the last passenger ship to New York via Sweden. They reunited with family in Colchester and later moved to Hartford, where Al spent most of his younger years.

While studying economics at the University of Connecticut, he met Leah Bessette, who would become his lifelong companion. They married in 1962, two years after Al’s graduation and two weeks after hers, and moved in 1965 with their daughter Laurie to their permanent home in Cheshire. Al’s career focused on information technology at United Illuminating and Northeast Utilities. He and Leah traveled extensively through Europe, the US and the Caribbean.

Al loved raising vegetables and growing flowers, especially dahlias. He deeply appreciated nature, was an excellent cook and actively followed the stock market. Above all, his family was the most important part of his life. Besides his wife of 58 years, his daughter and her husband, Fred Morrison, he leaves a granddaughter Lydia, a brother Enar, and several nieces and nephews. He was predeceased by a sister Elaine (Snyder).

Due to COVID, a memorial service and celebration of Al’s life will be held at a later date. In lieu of flowers, donations in Al’s memory can be made to the Cheshire Public Library at www.cheshirelibrary.org/donate/, Planned Parenthood of Southern New England at www.plannedparenthood.org/planned-parenthood-southern-new-england or a charity of one’s choice. The Alderson-Ford Funeral Home of Cheshire has been entrusted with his care. To leave online condolences for his family or to share a memory of Al, please visit www.fordfh.com
To order memorial trees or send flowers to the family in memory of Algert R. Sanders, please visit our flower store.