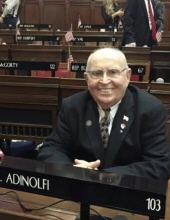 Alfred C. Adinolfi, 85, passed away Wednesday, December 18, 2019, at Hartford Hospital. He was the husband of Lillian (Ballo) Adinolfi.
Mr. Adinolfi was born on August 24, 1934, in Brooklyn, NY, the son of the late Carmine M. and Caroline (Monetti) Adinolfi. He proudly served his country in the United States Air Force with the Tactical Air Command at Camp Edwards in Massachusetts and has called Cheshire his home since 1979.

He served an active role in local and state politics. He served on various town commissions as well as four consecutive terms on the Cheshire Town Council. In 1998, Adinolfi ran for a seat in the state legislature and won, serving the 103rd District for 15 years. He was known as an advocate for military veterans and their families. In recognition of his service, Adinolfi was inducted into the Connecticut State Veterans Hall of Fame in 2017. He was a member of the American Legion Post 92 in Cheshire.

Besides his wife of 64 years, Mr. Adinolfi is survived by his daughters Jo-Ann Adinolfi Holstein and her husband Joseph of Cheshire and Debbie Ann Dance and her husband Bob of Warren; his brother Richard L. Adinolfi of PA; his sister Teresa Fow of Naugatuck; his grandchildren Michael Cropp, Mandi and Peter Dance, Amanda Holstein; his great-grandchildren Dominick and Talia Quaresma, Baili Dance, Michael DiFronzo, Abigail and Camden Cropp and Lily Byrne-Brasche. Besides his parents, he is predeceased by his granddaughters Michelle Dance and Jacqueline Cropp and his sister Rosalind Loguidice.

Arrangements – Visitation for Mr. Adinolfi will be held on Sunday, December 22, 2019, from 2 to 5 pm at the Alderson-Ford Funeral Home of Cheshire, 615 S. Main St. The funeral procession will leave the funeral home on Monday morning at 9:15 am and proceed to St. Aloysius Church for a Mass of Christian Burial at 10 am. Burial will follow in Cheshire Hillside Cemetery. Memorial contributions may be made to M.A.D.D. (Mothers Against Drunk Driving), 317 Foxon Rd, East Haven, CT 06513.
To order memorial trees or send flowers to the family in memory of Alfred C. Adinolfi, please visit our flower store.