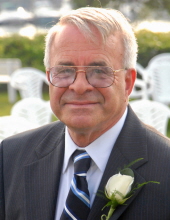 CHESHIRE- Alexander E. Nebolsine, 83, died May 25, 2020 at the Midstate Medical Center. He was the widower of Susan Coe Nebolsine who predeceased him in 2011 after 18 years of marriage.

He is a graduate of Leonia High School in NJ and attended Paul Smith’s College in NY. He was a veteran with service in the United States Army. Alexander was employed at Michael’s Jewelers until his retirement in 1993. In his free time, he enjoyed photography, birding, meteorology and taking long walks.

Mr. Nebolsine is survived by his three stepchildren Deborah and her husband Mark Curtiss of Medford, MA, John and his wife Denise Coe of Charlotte, NC, and Margaret and her husband Sherlock Campbell of Wallingford; and four step grandchildren Alexander, Maura, Zachary, and Jennifer.

He is also survived by a brother Peter and his wife Cindy Nebolsine of Naples, Florida, their children Nicholas and Samantha and grandchildren Eliot, Riley, Kyra and Yuri ; his sister Elizabeth and her husband Jonathan Bogert of McCormick, South Carolina and Alex’s nephews Matthew, Phillip, Michael and grandniece Abigail & grandnephew Henry.

A private graveside service will be held at Mount Carmel Cemetery in Hamden. The Alderson-Ford Funeral Home of Cheshire, 615 South Main St, 06410, is assisting the family with the arrangements. In lieu of flowers, donations in his name may be made to The ALS Association, Gift Processing Center, PO Box 37022, Boone, IA 50037-0022.
To order memorial trees or send flowers to the family in memory of Alexander E. Nebolsine, please visit our flower store.