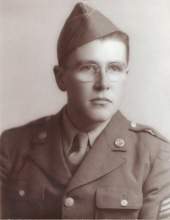 Judge was born February 7, 1922, in Naugatuck, the son of the late Arthur and Harriet (Tewksbury) Saunders. A lifelong resident of Naugatuck, Judge was an active member of St. Michael’s Episcopal Church, serving on the Vestry where he held the position of Junior Warden as well as being a member of the Men's Club. He proudly served his country during WWII in the U.S. Army as a Staff Sergeant in the 102nd division. He retired from Prudential Insurance in 1985 after 35 years as an agent. In his retirement years, Judge was a valued member of the Alderson Funeral Home staff as a Funeral Assistant.

Judge is survived by his daughter Nikki and several nieces, nephews, grandnieces, and grandnephews. In addition to his parents, he is predeceased by his brothers Edwin and William.

Arrangements – Funeral services will be held on Wednesday, November 13, 2019, at St. Michael’s Episcopal Church, 210 Church St., Naugatuck at 10:30 a.m. Burial will follow in Grove Cemetery and there are no calling hours. Memorial contributions may be made to the Langhorst Scholarship Fund, c/o St. Michael’s Episcopal Church, the Naugatuck Historical Society, P.O. Box 317, Naugatuck, CT 06770 or the Whittemore Library, 243 Church St., Naugatuck, CT 06770. The Alderson-Ford Funeral Home of Naugatuck is assisting with arrangements.
To order memorial trees or send flowers to the family in memory of Alden "Judge" Saunders, please visit our flower store.