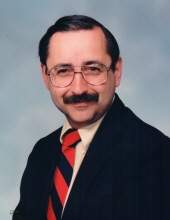 Gary G. Gombar, age 73, of Southington entered into rest on Wednesday, April 13, 2022 at MidState Medical Center in Meriden with his loving family by his side. He was the devoted husband of the late Gloria (Fargnoli) Gombar for over 32 years until her passing in 2016. Gary was born on October 6, 1948 in Bridgeport, son of the late Russell and Alice Gombar.

Gary grew up in Bridgeport, attending local schools and eventually graduating from Harding High School, Class of 1965 and continuing his education at Fairfield University, where he obtained his Master’s degree in Education. Gary was a French Teacher at Long River Middle School in Prospect and later the Principal for Laurel Ledge Elementary in Beacon Falls for over 30 years, retiring in 2007. He loved to travel and did to many destinations in the US and Mexico, and one of his favorite places at home was Family Pizza in Southington. Throughout his life, Gary befriended many Dachshunds that became family, to include his cherished, Bailey; and he was fond of his “grand-furbabies”, Fuji and Colby.

He is the beloved father of Alyssa Brooks and her husband, John of Cheshire and Lisa Whitaker and her husband, Gene of Southington. Gary is also survived by his loving grandchildren, Matthew and Molly Whitaker, and Kira DeCerb; his brother, Richard Gombar and his wife, Sue Livingston of VT. He was predeceased by his daughter, Kara DeCerb.

Gary’s family would like to extend their sincerest gratitude to the nurses and staff at MidState Medical Center for the compassionate care they provided to Gary during his final days, especially to Kevin, Jackie and Alyssa in the ICU.

Friends may greet Gary’s family at the Alderson-Ford Funeral Home of Cheshire, 615 So. Main Street, Cheshire, CT 06410 on Tuesday, April 19, 2022 from 9 until 10AM. His funeral service will follow at 10AM in the funeral home. Burial will be private and at the convenience of his family. Memorial contributions may be made to the Lupus Foundation of America at www.lupus.org. To view Gary’s tribute video or to leave his family condolences, please visit www.fordfh.com

To order memorial trees or send flowers to the family in memory of Gary G. Gombar, please visit our flower store.