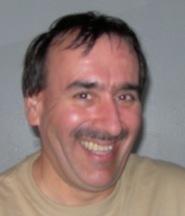 PLANTSVILLE- David Kirychuk, 53, passed away Wednesday, May 7, 2013 at Hartford Hospital.

He was born July 21, 1960 in Meriden, son of Ann (Christolini) and the late David Kirychuk.

David was a graduate of Wilcox High School Class of 1978. He was employed as a Machinist at Pratt and Whitney. David was an active member of Grace Baptist Church where he served as a Deacon, and also ran the Missions Committee, Growth Group, and Sunday School. He was an avid Skier, and Bowler, and loved riding motorcycles.

He is survived by a son David J. Kirychuk; a daughter Leah Kirychuk of Bethlehem; a brother George and his wife Karen Kirychuk of Glen Bournie, MD; two sisters Shirley and her husband Sergio Rodriguez of Pflugerville, TX, and Mary Henderson of Waterbury.

Arrangements- David's funeral will be held 9:45 A.M Tuesday May 14, 2013 from The Alderson Funeral Home of Cheshire, 615 South Main St, 06410 to Grace Baptist Church, 55 Country Club Road, Cheshire, 06410 for a service at 10:30 A.M. Burial will follow in Cheshire Hillside Cemetery. Calling hours will be held Monday May 13, 2013 from 5 to 8 P.M at the funeral home.Donations in his name may be made to Grace Baptist Church Mission Fund, 55 Country Club Road, Cheshire, 06410
To order memorial trees or send flowers to the family in memory of David Kirychuk, please visit our flower store.